Hyphenating long words at the ends of lines in a flowing paragraph of text allows more text to fit on fewer lines. This is especially important with fully justified text to reduce the “rivers of white” problem, where a lot of white space has to be introduced to pad out each line to the exact width of the text column.

In earlier versions of Designer, words were only hyphenated if they contained an actual hyphen character or had a soft hyphen added manually. Version 11 now includes automatic hyphenation as a new paragraph attribute. It uses a combination of built-in hyphenation rules, language-specific hyphenation dictionaries and even an optional list of custom hyphenations for each document.

With the following full justified paragraph example, note how the spacing of the second line of text is much better when hyphenation is on.

in the flyout bar at the end of the text tool InfoBar. Remember this is a paragraph option, so select the text to which you want to make the change first.

To change the hyphenation settings for the current document, click on the Spell-checker option

and then select 'Hyphenation Settings' in the dropdown menu of the spell-checker . The settings dialogue will appear: 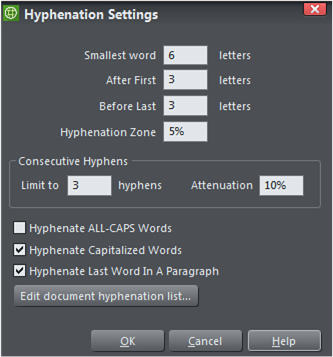 You can control the size of the shortest word that can be hyphenated, as well as how far from the beginning and end of a word hyphens can be introduced.

Consecutive Hyphens - Use to limit the number of consecutive lines that can end in hyphenated words. The Attenuation setting specifies a "soft" limit on this, so that you can set a balance between having consecutive hyphenated lines and lots of white space on following lines. A useful value is between 5% and 10%. Values higher than 20% often inhibit consecutive hyphens so much that they no longer occur at all.

The final three checkbox options allow you to choose whether ALL-CAPS WORDS, Capitalised Words and the last words in a paragraph can be hyphenated or not. 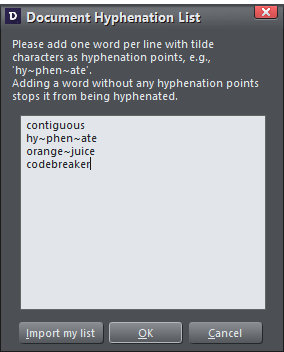 Each time you add a word to the hyphenation list for a document, that word is also added to a personal hyphenation list stored on your computer. Similarly, removing a word also removes the word from your personal list.

This list is automatically applied to all new blank documents you create (File -> New), so you don’t need to keep adding the same words to all your documents. However when you open an existing document, your personal hyphenation list is NOT automatically applied to it, because that could change the way the document appears. It would mean that two people opening the same document, could potentially see different results, because of their different personal hyphenation lists. So instead applying your personal list to a document has to be done explicitly - simply press the "Import my list" button on the Document hyphenation list dialog.

Does hyphenation work for languages other than English?

Can I insert hyphenations manually?

If you type "Ctrl + -" (minus key) it inserts a soft hyphen which is a hyphen that only appears if the word can wrap at the end of a line. It's called a 'soft' hyphen because when the word appears in the middle of a line the hyphen vanishes (unlike a normal dash or minus character), so it intelligently hyphenates the words only if it needs to.

A hard hyphen can be inserted by typing "Ctrl + Shift + -" (minus key). A hard hyphen is one that will not cause a wrap at all. This is useful in situations where you have dashes in words that you do not want split at the end of lines.

Choose files or drag and drop files
all