How do I use auto text correction?

From version 11 we've introduced a new automatic text correct facility.  This allows you to set up your own shortcuts for terms or abbreviations that you tend to type regularly. For example, typing (c) would change it to ©. This feature is available from the text toolbar.

From there select the "Auto Correct Options"... 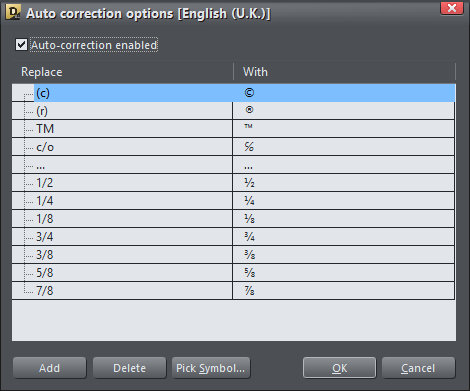 And tick the box at the top labled "Auto Correction Enabled".

Example use of the auto correction tool

Can I auto-correct existing text?

No. We would suggest using the search and replace feature to change the existing text.

Can I replace text with a Font Awesome symbol?

You can also replace text you type with a symbol from the Font Awesome symbol collection included in Web Designer, to make it easy to enter commonly used symbols into text. Enter the text you want to replace, click in the “With” field and press the “Pick Symbol…” button to bring up the symbol picker dialog. The symbol you choose will appear in the “With” field.

My characters change to a square when auto replacing the text

This will be because the font you are using doesn't have the symbol or character within the fonts subset. Either switch off the feature and type out what you want to type, or use a different font.

No, this feature is only available in the premium version.