The capitalisation options can be found on the text toolbar. 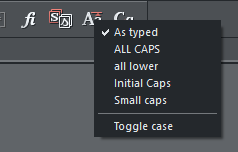 All caps allows you to set a text style where the case is set to either:

Xara keeps the underlying case, so even if you change the case to ALL CAPS for example, you can change it back to As Typed and it will appear as you originally typed out your words.

This option will simply toggle the case of each character, lowercase will appear as uppercase and uppercase as lowercase.